Are you better off today than four years ago?

According to the latest report from the Bureau of Labor Statistics, the official unemployment rate for all Americans rose by 1.3% since Barack Obama took office. But over the same period, the unemployment rate for Black Americans jumped by 10.9%, and the number of unemployed Black Americans climbed by 19.1%. So are we better off than we were four years ago? You might be, but the Black Community as a whole definitely is not. So will 90% of Blacks vote to re-elect Obama anyway? You betcha, because it’s not about tangible results, or even the content of one’s character; shamefully for many it’s about the candidate’s skin color. 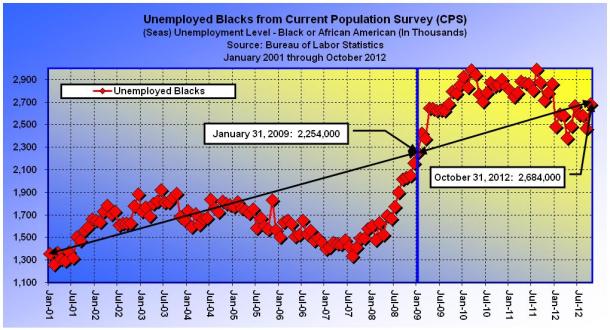 To name a few:

Well, you can’t have it both ways. You don’t achieve job creation through raising taxes, forcing employer mandates, social engineering, killing current jobs, offering free rides, or destroying the nation’s credibility. So admit it, Obama’s policies didn’t work. They didn’t work for Franklin D. Roosevelt, they have never worked, and they aren’t working today. So what now? More of the same, or will you dare to be different? Common sense dictates that if you want a different result, you must try something different. See you on Tuesday. Be there!

If the unemployment rate don’t fit, vote for Mitt!

Has Obama Created More Jobs Than Bush Yet?