On October 2nd, President Barack Obama correctly uttered, “I am not on the ballot this fall… But make no mistake: these policies are on the ballot. Every single one of them.” True, Obama is ‘Not’ on the ballot this fall, but he neglected to mention that his left-hand henchman, the one responsible for ramming through Obamacare without any Republican support, for killing more legislation passed by the people’s house than any other Senate majority leader in U.S. history, and the second most divisive and hated man in American politics today, Harry Reid is.

Just yesterday, a client lamented to me that she and her husband’s health insurance is going up by $1,000 a month next year, from around $526 per month to $1,526, and that they were in process of exploring other options. During the same conversation, she happened to mention that she wasn’t sure who to vote for this fall, Michelle Nunn or David Perdue. She heard some things about Perdue that she’s “not comfortable with”. I exclaimed, “You don’t know who to vote for?” I’m going to share with you what I told her and how I really feel. 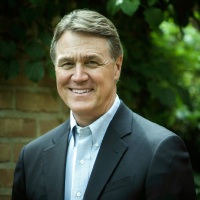 Basically, you’ve got David Perdue, a successful businessman, against Harry Reid. Reid may be cloaked under the guise of the daughter of retired politician Sam Nunn, but make no mistake about it, a vote for Michelle Nunn is a vote for Harry Reid, no more and no less. In fact, when asked whether she would vote to keep Mr. Reid in charge of the U.S. Senate, Michelle Nunn merely quoted a so-called joke she says a farmer told her: “If David Perdue wants to run against Harry Reid so much, why doesn’t he just move to Nevada?”

I didn’t get the joke. The truth is that if I thought it would do any good, and if I could go back in time, I would move to Nevada myself, for the sole purpose of voting Harry Reid out of office. When Harry Reid ran for re-election in 2010, I felt powerless and utterly disgusted as I watched Nevadan’s vote against their own, and America’s interests. Whether Reid runs for re-election in 2016 is up in the air. Questions about the 74-year-old’s health, among other things, lead some knowledgeable insiders to speculate that he will retire rather than face a challenge in 2016.

Fortunately for us, Harry Reid is on the ballot this year. There are 36 U.S. Senate seats up for election in 2014, and Harry Reid’s fate is on the line in each and every race. This is our chance. This is our moment. We finally have a shot at decapitating the second most hated SOB in American politics today, and we don’t even have to leave home. It boils down to this. If you want to keep Harry Reid in power, then go ahead and cast your vote for Michelle Nunn (or the Harry Reid clone in your state).

But, if like me, you’re sick and tired of partisan politics, and want to send a direct message of your disgust to Washington D.C., by delivering a pink slip directly to Harry Reid’s desk, then it’s real simple. Vote against the Democratic U.S. Senate candidate this fall, and vote for the Republican candidate. A vote for Michelle Nunn is a vote for Harry Reid, and a vote for David Perdue is a vote against Harry Reid. This year I’m voting against Harry Reid, and therefore in favor of David Perdue. 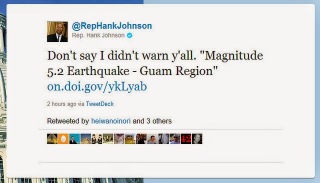 “Congressman Johnson has done an outstanding job,” said President Obama. “Together, we are fighting to restore middle class security and expand opportunity for all Americans. I’ve worked with Congressman Johnson as we’ve extended the security of health care to millions and pulled our economy back from the brink of collapse while protecting consumers and passing historic Wall Street reform. I am proud to stand with Hank and support his re-election.”

Congressman Johnson is famous for his on the record comment in March of 2010, where he reasoned that if 8,000 Marines were stationed on the Island of Guam, he feared the island could tip over and capsize due to overpopulation (see clip below).

And let’s not forget his 30 minute rant, Giants Need Midgets, in December of 2012 (see clip below). Despite these and many more idiotic comments, Johnson has not only been endorsed by Barack Obama, but he’s been re-elected 4 times, and runs virtually unopposed this year.

Unfortunately, there is no Republican candidate opposing Johnson in next month’s election. One has to wonder why. It seems that no one in the district is willing or able to oppose this moron. However there is one, and only one, alternative. Raymond L. Davis stands as the sole Certified Non-Partisan Write-In Candidate opposing Johnson this year. He may be our last hope.

Raymond L. Davis has lived in the Atlanta area for 33 years. The 50 year old is a licensed and ordained Minister at the Greater Traveler’s Rest Baptist Church, “House of Hope” in Decatur. He’s also the Founder, President/CEO of Genesis Network International, Inc., a 501c(3) non-profit organization that he has run for more than twenty years. Davis sits on many boards and is well known as an international and national advocate in the fight against HIV/AIDS.

If you’re sick and tired of President Obama’s policies, and his useless idiots like Hank Johnson, then don’t just skip over the District 4 U.S. Congressional section on this year’s ballot. It’s time to give someone else a shot. It’s time to send a clear message. This year, remember to write in Raymond L. Davis for United States House of Representatives, District 4.

There are two Proposed Constitutional Amendments on Georgia’s ballot this November 4th. They are as follows:

Yes on Proposal A

Well, Proposal A is pretty much a no-brainer. Do you want to increase the State’s income tax rate, and thus reduce its, and thereby your, competitiveness? I think not. A Yes vote on Proposal A prevents the General Assembly from calling a special session to raise taxes before the next official session begins on January 1, 2015. Therefore, I’m voting Yes on Proposal A.

No on Proposal B

I will be voting No on Proposal B, although the reasons are a bit more complicated. Increasing fines on those convicted of driving under the influence (DUI) of alcohol or drugs, or reckless driving, in order to allocate such additional funds to a Brain and Spinal Injury Trust Fund sounds like a noble idea, however, I believe this concept is best suited for a public Charity. We don’t really need the current Commission to provide such grants. A public charity will do just fine. Ironically, the Commission already accepts public donations. Who knew?

In exploring this proposal intelligently, two important questions arise. First, what is the Brain and Spinal Injury Trust Fund? And second, why does it need more money?

The Brain and Spinal Injury Trust Fund was created through a constitutional amendment passed by Georgia voters in November 1998. Who knows what we were thinking back then? It is funded solely through a surcharge on DUI (and reckless driving) fines, to assist Georgians with traumatic brain and/or spinal cord injuries, by awarding grants to help alleviate a portion of the often insurmountable costs of procuring necessary equipment and services to help rebuild lives after a traumatic injury.

Wait a minute! Wasn’t the Trust Fund created to penalize, and thus discourage the number of DUI’s? If so, then it’s working. However, if its real purpose was to establish a government-backed slush fund, then perhaps fines should be increased, and rather dramatically, since any increase would have to be proportional to the declining number of DUI convictions. What this would mean is if the number of DUI’s dropped to 10 on an annual basis, then this lucky 10 would have to pay fines of around $206,964 apiece, in order to reboot the Trust Fund. Did you get that? If not, here are a few more reasons to vote No on Proposal B.

In its FY-2013 Annual Report, the Brain & Spinal Injury Trust Fund Commission stated that the estimated lifetime costs of care for a person with a traumatic brain and spinal injury could reach upwards of $4,000,000. Yet, according to the same report, the maximum lifetime cap on awards through the Commission is just $15,000 per applicant, hardly a drop in the bucket.

Further, because the Trust Fund is a payer of last resort, an applicant must have exhausted all other fund sources, such as Medicaid, Medicare, SSI, Private Insurance, Disability Insurance, VA, Victims Compensation Fund, etc…, in order to be eligible. In other words, only a handful of applicants will ever even qualify for this penury.

And then there’s this. Eligibility depends on the cause of injury, which must be one of the following: accidental fall, accidentally struck by or against an object/person, assault, self-inflicted injury, sports/recreation injury, and last but not least – a transportation/motor vehicle accident. So let me get this straight, we are collecting fees from those convicted of DUI and reckless driving (traffic) violations, and giving it to persons injured in non-traffic related accidents. What’s wrong with this picture?

Finally, according to its FY-2013 Annual Report, there were a total of 73,770 statewide traumatic brain and spinal injuries in 2013, yet the Commission was only able to grant awards to 242 persons, averaging $5,550 each. This leads me to conclude that the Trust Fund isn’t of much use to anyone at this point in time.

If you all want to punish those convicted of DUI and reckless driving, by all means, do it. But if you want to use this as an excuse for maintaining a government slush fund, then forget about it. I’m voting No on Proposal B, and if I could, I would vote to completely disband the Brain & Spinal Injury Trust Fund and its Commission. Its mission, although a noble one, can more effectively be carried out by, and should be transferred over to, a public charity. You got that?