Rick Perlstein said it best, “I believe politics is a team sport. That, for awful and unfortunate reasons beyond any of our control, the American system only allows, effectively, for two teams.”

Is politics a team sport? The question resurfaced recently when Senator Rand Paul referred to the Graham-Cassidy Health Care Plan as — “Amnesty for Obamacare.”

When I saw this, I immediately fired off a tweet to Senator Paul stating, “Not again! It’s a team sport. Time is up. If you are not Republican, then get off the team and go join the Democrats.”

Not again! It’s a team sport. Time is up. If you are not Republican, then get off the team and go join the Democrats.

An unidentified third party then replied, “Wrong – it’s absolutely NOT a team sport. Members must represent their constituents’ wishes – not follow some pigheaded slogan.”

In reality, it’s Senator Paul who’s following a self-contrived “pigheaded slogan”, while most Republicans in the House, 90%+ of those in the Senate, and the Trump Administration are in support of a “bill”, which repeals the main provisions of Obamacare, and takes power away from the District of Columbia, handing it back to the states.

If politics isn’t a team sport, then why do political parties exist? And, what is the purpose of winning the majority in both houses and the White House if the party in control isn’t going to stick together on major legislation? Of course, politics is a team sport.

Yet there always seems to be at least one grandstanding maverick, almost always a Republican, who wants to make a name for himself rather than play his position. Face it, Rand Paul doesn’t represent any constituents. Like John McCain and a few others, he merely represents himself.

If Senator Paul represents anyone, it should be the party he belongs to, whichever that may be. At this point, he represents constituents of the Democratic Party, who oppose the bill at all costs, and cares nothing for Republicans, the majority of whom favor some measure of victory.

Under the Graham-Cassidy plan a Federal block grant is given annually to states to help individuals pay for health care, Planned Parenthood is defunded, and the individual mandate, employer mandate, and medical device tax are completely repealed, to name a few. But even better, it’s supported by most Republicans in the House, 90%+ of those in the Senate, and the Trump Administration. So, what’s Rand Paul’s problem?

If Senator Paul can’t get 90%+ of Republican Senators to go along with his proposal, which he can’t, then perhaps he should dismount from his high horse and support the 90%+ of his party who see merit in Graham-Cassidy. If that’s not good enough for Senator Paul, then only one choice remains.

Stop calling yourself a Republican, and go team up with those more in line with your views. At this point in time that would be none other than the Democratic Party, which stands firm, in unison, against every proposal favored by the President and the majority of Republicans. 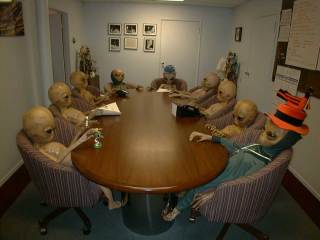 ~ Too Big, Messy, Tough and Democratic for Obama

When that year was over, they came to him the following year and said, “We cannot hide from our lord the fact that since our money is gone and our livestock belongs to you, there is nothing left for our lord except our bodies and our land. Buy us and our land in exchange for food, and we with our land will be in bondage…” ~Genesis 47:18-19

We have a big, messy, tough democracy? So is Obama advocating an alternative form of government? Would change come quicker if we had a dictatorship, or a super-committee? If I understand Obama correctly, what he is saying is that, “a government by the people; a form of government in which the supreme power is vested in the people and exercised directly by them or by their elected agents under a free electoral system”, is too big, too messy, and too tough for him. Well, I have one suggestion for you: ‘Quit’! Go back home, and use your community organizing (a.k.a. destabilizing) tools to try to fix what you got wrong in Chicago. This will relieve you of a couple of hundred thousand dollars per year that you didn’t need anyway, while giving us a chance to clean up the damage you have done to our nation in such a short time span.

A democracy can also be described as a state of society characterized by formal equality of rights and privileges. The way it’s supposed to work is that whether majority or minority ideas are put on the table, they are given equal respect. One side calling the ideas of the other evil, terroristic, or selfish does not a democracy make, especially when such ideas may be more plausible than its own. Is killing the leader of Libya and his supporters democratic? Does the execution of one political party leader promote equality of rights and privileges for all?

“For in the same way you judge others, you will be judged, and with the measure you use, it will be measured to you.” ~Matthew 7:2

In the United States, one side believes that raising taxes on those who are more prosperous will solve all of society’s problems. They call this, shared sacrifice. But when others point out that the process will only raise $70 billion per year against a budget deficit of $1.2 trillion, thus leaving a $1.13 trillion per year gap, they are called “terrorists”, and blamed when the nation’s credit rating is slashed. So what about the other $1.13 trillion per year? The compromise: ‘We will form a new democracy, comprised of 12 politicians, six from each major political party, and let them decide’. Is this how democracy works? What happened to the fundamental right of ‘no taxation without representation’?

One side believes that if more tax revenues are needed, then taxes ought to be raised on the 5% who already carry water for the other 95%. But another school of thought believes that if more taxes are needed, society should encourage the creation of more taxpayers. When one side points out that 51% of the labor force pays FICA taxes, but doesn’t pay any income taxes, while the other 49% pay both, they are called evildoers, haters of the poor, and accused of being against the concept of “shared sacrifice”. What gives?

“A man planted a vineyard. He put a wall around it, dug a pit for the winepress and built a watchtower. Then he rented the vineyard to some farmers and went away on a journey. At harvest time he sent a servant to the tenants to collect from them some of the fruit of the vineyard. But they seized him, beat him and sent him away empty-handed. Then he sent another servant to them; they struck this man on the head and treated him shamefully. He sent still another, and that one they killed. He sent many others; some of them they beat, others they killed. He had one left to send, a son, whom he loved. He sent him last of all, saying, ‘They will respect my son.’ But the tenants said to one another, ‘This is the heir. Come, let’s kill him, and the inheritance will be ours.’ So they took him and killed him, and threw him out of the vineyard. What then will the owner of the vineyard do?” ~Mark 12:1-9

While one side devises to kill capitalists, who are also citizens, and distribute their property to the masses, the other simply asks, “Do the 51% who don’t pay personal income taxes benefit from a national defense? Do they drive on federally funded roads and bridges? Have they not benefited from public education, and other federal programs?” We have a government that dishes out up to $8,000 per year in income tax refunds to families who pay no personal income taxes, taking it from those who do, and when the families who pay question the logic, they are called selfish. But is it selfish to ask why the one who has sacrificed time and effort to plant, build, and employ others must be brought down, while those who have not are lifted up? Shall the life’s work of the few be stolen and distributed to the masses in the name of good? What will the owner of the vineyard do?

Everyone who owns real property in my community pays real estate taxes, a form of shared sacrifice, to help fund our common welfare. The tax is based on the value of each property. Even senior citizens, widows, veterans, and those with disabilities pay, although at lower rates. Homesteaders receive a discount, while landlords pay the most, but no one is exempt. Even renters pay real estate tax, which is embedded in the rent. But when it comes to federal income taxes, 51% are given a pass, while a minority is robbed. One side believes that “shared sacrifice” means, “Everyone should pay something”; while the other believes that, “the most fortunate should pay it all”. So who’s right? If all who own or use real property must pay real estate taxes, shouldn’t all American citizens and residents who have income pay some measure of the income tax?

There is one change you can believe in, and it will be here in November of 2012. You can believe that the haters of democracy, those who continually bash the most noble ideals which made this nation great, who instigate racial, class, and party division, who seek to buy their jobs through political favors, who call their neighbors terrorists, and selfish evildoers, who destabilize other nations, killing women and children in the process; it is they and their leader in the White House who will be sent packing. That’s how democracy works, that’s what’s coming, and you can bank on it.

Joseph said to the people, “Now that I have bought you and your land today for Pharaoh, here is seed for you so you can plant the ground. But when the crop comes in, give a fifth of it to Pharaoh. The other four-fifths you may keep as seed for the fields and as food for yourselves and your households and your children.” ~Genesis 47:23-24