Time to Abolish the Democratic Party

Abolition – the action or an act of abolishing a system, practice, or institution.

Hypocrite – a person who indulges in hypocrisy.

According to the Democratic Party of 2018, we must abolish the U.S. Immigration and Customs Enforcement agency (I.C.E.) and replace it with something else. What that something else should be, they never say.

Perhaps I.C.E. could be replaced by the same left-wing mobs that are going around harassing conservatives in restaurants, department stores, movie theaters and gas stations, and standing around holding signs, screaming and yelling nonsense at the top of their lungs every weekend. This might just be enough to drive away terrorists, smugglers, gangs, and drug cartels. Nah, that won’t work.

Yet, when it comes to health care, in defending Obamacare, Democrats reason that whether male, female, or somewhere in between, anyone declining coverage should indeed be punished, via the income tax code (i.e. the individual mandate). You either play, or you pay.

So, let’s get this straight. Under the Democratic Party’s philosophy, you have a right to choose not to be covered by health insurance, but if you do you will be punished financially. Yet, a woman should have the right to terminate the life of her unborn child without consequence. Well, you’re either for freedom or you’re not. Selectively choosing when, or for whom it applies is hypocrisy.

The left-wing movement du jour, the push to abolish I.C.E., is sounding more and more like a Russian propaganda campaign. Quick, somebody call the Special Counsel! Nah, that won’t work either.

The next course of action should be to officially abolish the Democratic Party, which has renounced the use of reason to such a degree that it is effectively obliterating itself. It’s extirpation is just a matter of time. What America needs is a new political party, one that doesn’t recklessly commit hypocrisy on such fundamental American principles as our freedom and sovereignty. 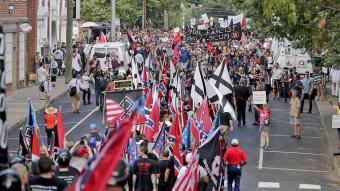 According to the First Amendment, “Congress shall make no law …abridging the freedom of speech, …or the right of the people peaceably to assemble, and to petition the Government for a redress of grievances.”

Freedom of speech may be defined as, “the right to express any opinions without censorship or restraint.” The right to peaceably assemble, and to petition government for redress of grievances may be defined as, “the individual right or ability of people to come together and collectively express, promote, pursue, and defend their ideas; and make a complaint to, or seek the assistance of, one’s government, without fear of punishment or reprisals.”

Congress has, thus far, made no laws abridging the freedom of speech, or the right of the people peaceably to assemble, and to petition the Government for a redress of grievances. Yet others, including some local governments, federal government employees, extremist groups, the Democratic Party, Google / YouTube, and Facebook, often enforce their own un-American statutes.

For example, Google recently suspended my Google Plus account indefinitely, without any right of appeal, simply for declaring myself to be a Trump supporter and posting pro-Trump news articles. Of course, prior to doing so my Collection, entitled, “Trump 2016 / 2020” had over 10,000 followers and more than 10,000,000 views. My attempts to reinstate the account fell on deaf ears.

Since I did not violate any of Google’s rules, it claimed that I violated its impersonation policy, even though, unlike others, I used my real name and biographical profile. Thus, I am no longer a part of Google’s social networking experiment. I no longer have the freedom to express myself, nor the right to peaceably associate with friends and followers, at least not using Google’s services. Nine years of associations, thousands of followers, hundreds of posts and comments, gone in a flash. So, what’s next?

If the KKK, Neo-Nazi’s, white nationalists, Alt-left, Black Lives Matter, Blue Lives Matter or any other group wants to assemble peaceably to petition the government, they have a right to do so without fear of punishment or reprisals. Certainly, such groups have the right to assemble, and the freedom to write or say whatever they wish. But, that’s not the problem in this era. The plight of our day lies in counter-protests.

Counter-protesters serve no useful purpose other than to deny others of their basic Constitutional guarantees. Government condemnation of domestic hate groups serves no meaningful purpose, as they have a right to exist. The role of the federal government should be to condemn intolerance. There is no place for intolerance, at any level, in our society.

What the federal government should do is shut down counter-protest movements in every shape, form and fashion. Congress must pass additional laws protecting basic first amendment rights, by cracking down on counter-protesters. It must also outlaw the practice of street protests. Allowing opposing groups to protest at the same time, in public venues, is asinine.

Allowing any group to protest in the streets, or public places, violates the rights of others. Allowing groups with opposing views to counter-protest encourages violence. Rather than cultivate intolerance and violence, the federal government should do everything within its power to discourage it, while at the same time protecting everyone’s First Amendment rights.

The role of the federal government, and all who have taken oath to uphold the Constitution, is not to pick sides, but rather to promote tolerance in a diversity of ideas.

Google’s actions against me are reprehensible. But, the freedom I have was not granted by Google, and Google cannot take it away. Rather than fight, I have chosen to take my business elsewhere.

If you don’t like MSNBC or CNN, don’t watch. If you don’t like Donald Trump, don’t go to a Trump rally, stay at home. Better yet, pow-wow with the candidate of your choice and prepare for the 2020 election. If you don’t agree with the KKK, Neo-Nazi’s, white nationalists, the Alt-left, Black Lives Matter, Blue Lives Matter, the Democratic Party, or any other group, don’t support them or attend their functions. Instead support and associate with groups you agree with. Actions such as these are not extreme in nature, but are simply the American way.