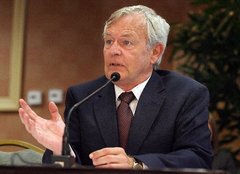 During the oil rig explosion hearings held in mid-May, Patton admitted that he has never asked for, nor reviewed, blowout preventer plans on any of more than 100 applications his office approves each year. In fact, Patton stated that he was never instructed that he needed to review such plans.

When asked whether this is standard MMS policy, or just Frank Patton’s policy, Mr. Patton said, “I’m not sure.”

What? You’re not sure?

It’s bad enough that Patton is not a licensed Professional Engineer (PE). (See An Unlicensed MMS Engineer and The Gulf Disaster). But his not knowing why he would need to ask to see the actual blowout preventer plans, before he approves them, is just plain ignorant. Without even looking at the plans, Patton has perhaps approved more than 100 blowout preventers each year. What happened to due diligence? What happened to common sense?

Has the Federal Government gotten so big that one hand doesn’t know what the other is doing? It sure looks that way. Why are Federal employees exempted from being required to hold PE licenses? There’s really no excuse.

It’s time for the Federal government to stop placing all the blame for this disaster on BP, to man-up, and to take responsibility for its own failures. This message is for the House Oversight and Investigations Subcommittee. For God’s sake, open up your eyes, and then start telling the truth for a change.

Following are some excerpts from the oil rig explosion hearings:

Under scrutiny from officials in his own agency, the local Minerals Management Service engineer who approved BP’s application to drill under the Deepwater Horizon admitted that he approved the blowout preventer that failed to stop the Gulf of Mexico oil spill without assurances that its last-ditch mechanism would work on the drill pipe the company was using.

Jason Mathews, an MMS official who sits on the six-member joint Coast Guard and MMS investigative board, questioned Frank Patton, the agency’s New Orleans District drilling engineer, about his approval of BP’s drilling permit. Mathews noted that MMS regulation 250.416(e) requires would-be drillers to submit proof that the blowout preventer they are using to shut off the well will have enough power to shear a drill pipe in case of an emergency.

Those mechanisms on the 450-ton blowout preventer at the bottom of the seabed are called blind shear rams, a pair of high-pressure valves and blades that are supposed to slice through a gushing drill pipe and close off a well leak. But attempts to get those shear rams to operate on the well below the Deepwater Horizon have been unsuccessful since the April 20 disaster.

Patton testified he was not aware of any such requirement and never demands it from more than 100 applications his office reviews each year.

“I have never been told to look for this statement,” Patton said. The BP application had “no information on blind shear rams’ ability to shear the drill pipe used.”

“If they didn’t submit it, why did we approve it?” Mathews asked.

“That is one thing I don’t look for in my approval process,” Patton said. “I’ve never looked for that statement there.”

“Is this just you, or is this MMS-wide? ” Mathews persisted.

“I’m not sure,” Patton said sheepishly.

Source: New Orleans Times-Picayune and An Unlicensed MMS Engineer and The Gulf Disaster

One thought on “Patton’s Folly: Is MMS Indictable for Gulf Disaster?”