According to the latest report from the Bureau of Economic Analysis, real gross domestic product increased at an annual rate of 1.8% in the first quarter of 2011. But by now most of us understand that this is merely calculated by measuring an increase of roughly 0.45 percent from the fourth quarter of 2010 to the first quarter of 2011, and then multiplying the result by four (.045 * 4 = 1.8). That’s all well and good, but it doesn’t necessarily tell us the truth. What most of us really want to know is the annual rate of GDP growth since Obama’s policies were implemented, and how that compares to the previous administration. To arrive at the answer, one must first measure the annual rate of GDP growth from the time Obama took ownership of the economy, and then compare this to the previous rate. In terms of real (i.e. inflation-adjusted) per capita (i.e. population-adjusted) GDP, the U.S. economy has declined at an annual rate of -0.29% since 2008, as compared to an annual growth rate of 1.15% during the eight-years prior. That’s a decline of 396.5% for the mathematically inclined.

Gross Domestic Product is comprised of four components, personal consumption, gross private investment, government expenditures, and net exports [GDP = C + I + G + (X – M)]. Under Obama’s policies, real GDP has grown at an annual rate of 0.71% as compared to an annual rate of 2.23% during the previous eight-year period. In other words, GDP grew 214.1% faster in the eight-years before Obama. During the previous administration, an annual growth rate of 2.23% wasn’t bad considering the economy went through one of the worst recessions since the Great One. So exactly how can an annual growth rate of 0.71% be called a recovery? Now let’s compare all four components of GDP.

Personal consumption is the largest component of GDP. Personal expenditures fall under one of the following categories: durable goods, non-durable goods, and services. For example, expenditures on rent, food, clothing, tobacco, alcohol, jewelry, gasoline, computers, cellular phones, and medical expenses are included, while the purchase of a new home is not. Real personal consumption is currently slumping along at an annual growth rate of 1.06% versus 2.72% before Obama. In other words, personal consumption was growing 156.6% faster before Obama’s fundamental transformation. All of the federal governments deficit-financed spending on unemployment benefits and food stamps doesn’t appear to be doing the trick after all.

Gross private investment includes business investments such as construction of new facilities, purchases of software, and purchases of machinery and equipment. Personal spending on new homes is also included. Real gross private investment has declined at an annual rate of -3.63% under Obama’s leadership, versus a marginal decline of -0.08% previously. In other words, real gross private investment has slowed by -4,437.5% since Obama implemented his vision for America. What does that tell you? It tells me that the business community lacks confidence in the direction our nation is heading. For example, Obama’s policies of hindering new oil drilling, and seeking to end tax deductions which encourage expansion of the U.S. oil and gas industry won’t exactly translate into any improvement in private investment for the near future.

Government spending is the sum of government expenditures on final goods and services such as salaries of public servants, purchases of weapons for the military, and any investment expenditure by the federal, and state or local governments. It does not include transfer payments, such as social security, welfare, food stamps or unemployment benefits. Real government consumption is presently growing at an annual rate of 0.74% as compared to an annual rate of 2.41% before Obama. In other words, although the Obama administration has added almost as much to the national debt in the last two-and-a-quarter years as was added in the previous eight, government spending under the previous administration actually added 225.7% more towards economic growth. Perhaps it’s not how much government spends, but rather what it buys. The numbers don’t lie. It’s clear that Obama’s idea of government investment is not the kind that adds anything to our economy.

Net exports are the difference between gross exports (what our nation produces in goods and services for other nations’ consumption), and gross imports (what our nation purchases in goods and services from other nations). Imports are subtracted from exports since imported goods are already included in C, I, and G. The only component of GDP with a more favorable result under Obama’s policies is real net exports, which is growing at an annual rate of 9.2% versus a decline of -1.45% in the previous eight years. However, this grand improvement has only added $104.4 billion to real GDP, representing just 0.78% of the total.

Of course the best measurement of GDP is found in real per capita results, after all the economy is not static. The effects of population growth combined with inflation can weigh heavily on the economy. The U.S. population has continued to grow at an annual rate of 1.0% since 2000; meanwhile inflation has grown from nearly 0.00% to 3.16% since January of 2009. So let’s see how this combination has affected GDP, disposable personal income, and personal consumption. 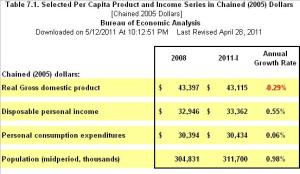 To summarize, real per capita GDP is presently declining at an annual rate of -0.29% versus a positive growth rate of 1.15% under the previous administration. Would you call this an economic expansion? Not hardly. So what’s wrong with the present administration? It acts like it has accomplished something by putting more Americans on unemployment, welfare, and food stamps than ever. It acts like it won’t be satisfied until the last U.S. oil company is run out of business, or until every last local bank, Wal-Mart or McDonald’s franchise is shut down. What will real per capita GDP look like if Obama’s policies are allowed to continue? It’s time to get serious about the matter of peaceful domestic regime change. It’s time for this slacker and his court jesters to go.