While Progressives, both left and right, feign anger arguing the merits of criminalizing Goldman Sachs, one of the most profitable companies remaining in the United States, folks on Main Street are contemplating the real cause of the economic crisis of 2007. At least, that’s what I’m pondering.

For example, in reviewing the Office of Inspector General’s report regarding the fall of Downey Savings and Loan Association (Downey) it is clear to me that firms like Goldman Sachs were not the source of the problem. Punishing Goldman Sachs for profiting from a ‘crummy deal’ does not get to the root of the problem, nor will it prevent the next crisis. Where Senator Carl Levin fell short was in that, he failed to investigate the origination of the ‘crummy deals’ which continue to run rampant from coast to coast. But that’s what happens when you let amateur government workers have too much power.

Downey was taken over on November 21, 2008 by the FDIC at a cost of $1.4 billion. This placed it into the top ten most expensive institutions taken over by the FDIC during this crisis. It is revealing to note that in the report, we are told that the primary cause of Downey’s collapse was its high concentration of option adjustable rate (ARM) loans and its lack of documentation in loans:

“The primary causes of Downey’s failure were the thrift’s high concentrations in single-family residential loans which included concentrations in option adjustable rate mortgage (ARM) loans, reduced documentation loans, subprime loans, and loans with layered risk; inadequate risk-monitoring systems; the thrift’s unresponsiveness to OTS recommendations; and high turnover in the thrift’s management. These conditions were exacerbated by the drop in real estate values in Downey’s markets.”

The OTS made constant recommendations to the bank but of course, the OTS was stripped to the very minimum because of bank lobbying over the past decade. The policy implication here becomes radically clear that if we are to have a legitimate oversight board, it must have the power to enact regulations on the books. That is probably one thing many people fail to understand right now. Many of the regulations necessary are already on the books. Yet the bodies governing these policies are so weak and pathetic, that banks were able to ramrod legislation that essentially made them shells with no ability to enforce the laws.’

Downey by the end of 2005 at the height of the bubble had 91 percent of its single family home loan portfolio in option ARMs. They basically went 100 percent with this toxic product. 73 percent of Downey’s option ARMs had negative amortization potential which of course did occur and imploded the bank. Just take a look at this stunning chart: 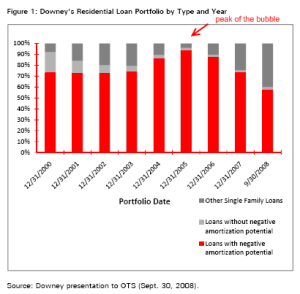 As the chart shows, Downey was in the game early on. Thus, their recast of 5 years on their typical option ARM started imploding much earlier and led to their demise in 2008 even before the major wave of option ARMs will swarm the market in 2010 through 2012. The disturbing facts also come out regarding teaser introductory rates which artificially allowed people to buy more home than they could afford. With the availability of “no-doc” loans anyone with a desire to get a loan got one. The fact that 91 percent of their SFR loan portfolio is option ARMs is appalling. Institutions in California basically created a casino with housing even though agencies knew of the longer term implications. In regards to policy, this gives us clear implications:

The bottom line, in Part I, is that Goldman Sachs was not in the loan origination business, and thus had nothing to do with the root cause of the financial crisis of 2007. Most of the culprits, banks who originated crummy deals, have already gone out of business. From January of 2009, through April 23rd of this year, there have been 197 bank failures. Of a certainty, there will be many more. The real questions should be (1) who legalized Option ARM’s?, and (2) who was responsible for regulating them? Try starting there and get back to me when you have a serious solution to a serious governmental failure.

These types of loans are also called “pick-a-payment” or “pay-option” ARMs.

When a borrower makes a Pay-Option ARM payment that is less than the accruing interest, there is “negative amortization”, which means that the unpaid portion of the accruing interest is added to the outstanding principal balance. For example, if the borrower makes a minimum payment of $1,000 and the ARM has accrued monthly interest in arrears of $1,500, $500 will be added to the borrower’s loan balance. Moreover, the next month’s interest-only payment will be calculated using the new, higher principal balance.

Option ARMs are often offered with a very low teaser rate (often as low as 1%) which translates into very low minimum payments for the first year of the ARM. During boom times, lenders often underwrite borrowers based on mortgage payments that are below the fully amortizing payment level. This enables borrowers to qualify for a much larger loan (i.e., take on more debt) than would otherwise be possible. When evaluating an Option ARM, prudent borrowers will not focus on the teaser rate or initial payment level, but will consider the characteristics of the index, the size of the “mortgage margin” that is added to the index value, and the other terms of the ARM. Specifically, they need to consider the possibilities that (1) long-term interest rates go up; (2) their home may not appreciate or may even lose value or even (3) that both risks may materialize.

In this way, a borrower can control the main risk of an Option ARM, which is “payment shock”, when the negative amortization and other features of this product can trigger substantial payment increases in short periods of time.

The minimum payment on an Option ARM can jump dramatically if its unpaid principal balance hits the maximum limit on negative amortization (typically 110% to 125% of the original loan amount). If that happens, the next minimum monthly payment will be at a level that would fully amortize the ARM over its remaining term. In addition, Option ARMs typically have automatic “recast” dates (often every fifth year) when the payment is adjusted to get the ARM back on pace to amortize the ARM in full over its remaining term.

For example, a $200,000 ARM with a 110% “neg am” cap will typically adjust to a fully amortizing payment, based on the current fully-indexed interest rate and the remaining term of the loan, if negative amortization causes the loan balance to exceed $220,000. For a 125% recast, this will happen if the loan balance reaches $250,000.

Any loan that is allowed to generate negative amortization means that the borrower is reducing his equity in his home, which increases the chance that he won’t be able to sell it for enough to repay the loan. Declining property values would exacerbate this risk.

Option ARMs may also be available as “hybrids,” with longer fixed-rate periods. These products would not be likely to have low teaser rates. As a result, such ARMs mitigate the possibility of negative amortization, and would likely not appeal to borrowers seeking an “affordability” product.