That depends on the meaning of the word right. Right?

In May of 2003, tax cuts were enacted. The tax cuts were responsible for the creation of 7.3 million new jobs beginning in August of 2003 and lasting through the end of 2007 (source: http://libertyworks.com/bush-tax-cut-myths-and-fallacies-1/). Tax cuts are the only proven method for bringing an economy out of recession. The deeper the tax cut, the greater the expansion.

As Liberty Works so aptly reminds us, “President Obama and the Democratic Congress have implemented a series of measures that defy the lessons of past recessions”, especially that of 1981, which was by some measures worse than this one. The chart below shows, “the job market recovery is faltering at best, after 31 months of Bush/Obama policies. There are 8 million fewer Americans now employed than in December, 2007.” 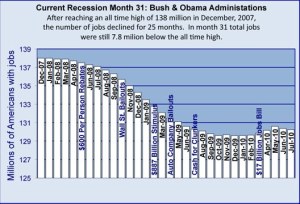 The results in the next chart, speak for themselves. “Reagan’s policies turned the job market around after 16 months of losses. The Reagan economy grew continuously for 90 months, creating a total of 21 million new jobs, or a 24% increase in the number of Americans who were employed.” 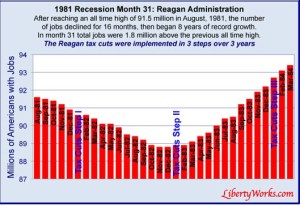 If the goal is to grow the economy, create jobs, and increase tax revenues, then tax cuts are the right direction. However, if the goal is something more sinister, then one must brainwash their constituents into believing that ‘tax cuts cause recessions’; that we are somehow heading in the right direction, and that a tax hike will further this trend.

It’s sinister enough to take advantage of a (manufactured) crisis in order to pass unwanted legislation. It’s entirely another matter to purposefully prolong a (manufactured) crisis, to the detriment of every American: black, white, red, yellow, and brown; Democrat, Republican, and Independent. Obama’s play book is little more than the old tried and failed policies of FDR. In an article entitled, “FDR’s policies prolonged Depression by 7 years, UCLA economists calculate“, you will find the following conclusion:

“We found that a relapse isn’t likely unless lawmakers gum up a recovery with ill-conceived stimulus policies.”

Are Democrats doing anything other than gumming up this recovery with ill-conceived stimulus policies? Are we really heading in the right direction?

Congress needs to quit spending, and cut taxes – now. If you’re not part of the solution, you’re part of the problem.

One thought on “Are We Heading In The ‘Right’ Direction?”