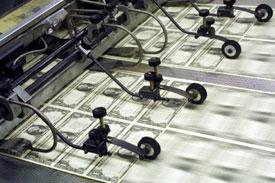 “Knowledge is an inherent constraint on power.” ~ Thomas Sowell

Do you think this might be a problem? If not, stop reading, and just vote for the nearest politician promising: more of the same. But if so, then how do we close the gap?

One way would be to raise taxes on the “rich”, which would bring in around $700 billion over the next 10 years, or $70 billion per year. But under this half-baked plan, it will take 10 years just to pay for this years’ increase in spending ($738 billion), and it won’t even put a dent in our future estimated deficits ($1 trillion per year), nor the national debt which is currently $13.5 trillion (tic, toc, tic, toc, tic, toc….). In fact, with the national debt growing at approximately $100 billion per month, the prospect of robbing the most productive citizens (i.e. small business owners) of an additional $70 billion per year doesn’t really amount to a hill of beans.

Common sense ought to tell us that unless either government revenue is raised by more than 71.8%, or federal spending is cut by the same, we will never again see a balanced budget, nor will we ever begin to put a dent in our ever growing national debt. So let’s be real about it, when the economy is growing at 1.9% (i.e. not growing), the federal government has no basis for creating a spending gap of 71.8%.

Is all of this spending necessary? Do you even know where our money is going? Let’s look at some of the key areas of concern, line by line (since Obama won’t). I am not going to go into a lot of detail on each item today, the objective is simply to highlight some key areas of concern.

First, there is the budget function known as ‘undistributed offsetting receipts’. Note that revenues from ‘rents and royalties on the outer continental shelf’ has declined by $14.7 billion, or -80.7%. Overall this area represents $6.5 billion of the current budget deficit. So did we stop charging fees for offshore drilling, stop drilling, or both? How will we make up the shortfall?

Next is the area known as ‘allowances’. Allowances? We are adding $18.7 billion to the budget for ‘Health Reform’, the so called ‘Jobs Bill’, and for ‘future disaster costs’ at a time when there is already a $13.5 trillion national debt, and a $1.5 trillion budget deficit. How are we paying for this?

Next, in looking at the area of ‘education, training, employment, and social services’ we notice a dramatic increase in spending of $51.2 billion, or 56.1%. Although there may be a desire to increase spending on ‘elementary, secondary, and vocational education’, a growth rate of 116.1% over 2008 levels is simply reckless. Let’s hope that our children are learning something valuable such as, “do as we say, not as we do”.

Then there’s the area of ‘natural resources and environment’ which represents an increase of $15.2 billion, or 47.8%. Although there’s some important stuff here, namely ‘water resources’, the question worth asking is: Why the big increase now, when we can ill afford it?

And lastly, there’s the area known as ‘international affairs’. We have increased spending overseas by $22.3 billion, or 77.2%. While some politicians falsely accuse other politicians of exporting jobs overseas, the federal government is itself guilty of exporting $51.1 billion of our future earnings overseas. Never mind that we can’t afford it, we have increased funding for ‘international development and humanitarian assistance’ by $12.5 billion, or 88.5%; ‘conduct of foreign affairs’ by $2.9 billion, or 27.5%; and gone from a surplus on ‘international financial programs’ to a budgetary drain of $6.5 billion, or a change of 101.7%. Again, who’s paying for this?

In conclusion, the federal government has created a 71.8% gap in its ‘fiscal year 2010 budget’, by increasing its own spending faster than any other growth rate on the planet. With U.S. economic growth at a mere 1.9%, it doesn’t take a genius to figure out that we have a problem. The problem is out-of-control spending. No viable entity can spend money at a higher rate than it brings it in, and stay in business for very long. But, the U.S. Congress is not a viable entity. This congress is already $13.5 trillion in debt, and is currently on pace to spend 71.8% more money in FY 2010 than it will take in. It’s time for this to end.