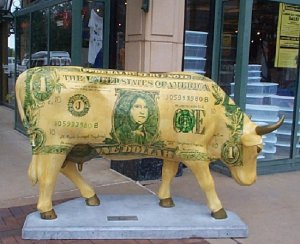 In Part I, we focused on unfair tax policies surrounding S-Corporations and Partnerships. The prospect of increasing tax rates on business owners is a far cry from what most of us would consider meaningful fiscal reform. Part II examines how government, both federal and state, milks corporations, and specifically small Personal Service Corporations (PCs) out of billions of dollars every year. In terms of combined taxes, if we add together federal and state corporate taxes, payroll taxes, and taxes levied on the wages and dividends of its owners; when the smoke clears, government walks away with approximately 76.6% of a PC’s pre-tax profits, and 45.4% of its gross income.

And just what is the end result of all the government’s efforts to hoard and redistribute our wealth? Well, as far as the federal government is concerned, with revenues of $2.2 trillion in fiscal year 2010, and a national debt of $13.6 trillion, it appears that Congress has already spent all of next year’s revenue times six. So when is enough, enough? Meaningful fiscal reform necessarily involves massive spending cuts, and major tax cuts. Our problem is government spending. Tax cuts have the effect of broadening the tax base, and are the only way to effectively increase government revenues.

“An unlimited power to tax involves, necessarily, a power to destroy; because there is a limit beyond which no institution and no property can bear taxation.” ~ John Marshall, McCullough v. Maryland, 1819

What is a Personal Service Corporation?

A personal service corporation (PC) is a corporation composed of employee-owners who perform substantially all of its services. Personal services include any activity performed in the fields of accounting, actuarial science, architecture, consulting, engineering, health (including veterinary services), law, and the performing arts. Like other C-corporations, PCs are subject to income taxes; but unlike regular C-Corps, PCs are taxed at a flat rate of 35% of taxable income.

The following table shows the 2010 federal income tax rates assessed on corporations. [In the examples which follow, the company is based in the state of Georgia and is subject to its corporate tax rate of 6% of taxable income.]

Examining its total contribution to federal and state taxes, we find that TEA-PC paid $220,225 in combined payroll taxes, and corporate income taxes. We also discover that its employee-owners paid an additional $112,950 in social security, Medicare, and federal and state income taxes. Finally we see that TEA-PC’s employee-owners got soaked for another $30,000 in taxes on dividends received out of the company’s after-tax profits. Overall, TEA-PC has been milked out of $363,175 in combined taxes. In other words, TEA-PC’s employee-owners have been assessed total taxes amounting to 76.6% of their pre-tax profits. That’s pathetic. How can American businesses grow, when they are being milked out of 76.6% of pre-tax profits every year?

Proving that TEA-PC was responsible for all of these taxes is easy. We know that the company directly pays payroll taxes on its employee’s pay, and corporate income taxes. What many non-business types don’t understand is that a corporation is also responsible for withholding and paying its employee’s share of taxes. Also, since in this case, the employees are owners, their after-tax dividend receipts are subject to double taxation. Dividends are first levied a 35% tax at the corporate level (plus 6% in state taxes), and then subject to another 15% on the owner’s personal income tax returns (plus 5% in state taxes).

An examination of TEA-PC’s tax ratios reveals the following:

In order to make the tax code more equitable, Personal Service Corporations, as well as regular C-Corporations, should be allowed to take a deduction for annual dividend distributions. This will lower corporate taxable income and the amount of corporate income taxes paid, put an end to double taxation; and enable more income to be distributed as dividends, and/or reinvested towards future growth. This is accomplished by adding a line to page one of Form 1120 for the dividend deduction.

In addition, the tax rate on PC’s should be cut dramatically. According to the tax rate schedule above, PC’s are taxed at the same rate as corporations with taxable income greater than $18,333,333. Why are PC’s with taxable income of $50,000, $100,000, or $400,000 taxed at the same rate as corporations making over $18,333,333? Does this sound like a pro-growth strategy? The government’s present fiscal commission is recommending cutting corporate rates to 26%, while others want them to be repealed entirely. Under the Revenue Act of 1926, the tax on corporations was 13.5% of net income (individual tax rates ranged from 1.4% to 25%). Today, we have a complex set of codes, rules, and regulations, which basically amount to nothing more than government lordship. It’s time to level the playing field so that no corporation has an unfair advantage over another, and so that government may no longer oppressively impose itself over private enterprises. I therefore propose a maximum corporate tax rate of 13.5% of net income.

My proposal will effectively lower the amount of taxes paid by corporations, and personal service corporations by ending the double taxation of dividends. By allowing corporations a deduction for the amount of dividends paid, more income is distributed to the personal level for efficient consumption. Also lowering corporate tax rates to the level imposed during the Roaring 20’s will allow our economy to return to a policy of robust growth. Once enacted, my proposal will result in economic growth on steroids, massive jobs growth, skyrocketing levels of entrepreneurship, greater freedom, and less dependence on the federal government.