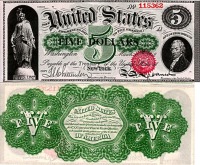 The rich rule over the poor. The borrower is servant to the lender. ~ Proverbs 22:7 ~

Free Our Money – So what’s the problem? You know, you think about it all the time. It’s debt, debt, debt! The way our economy is set up now, the only way it can grow is through incurring more debt, either through government, business or consumers. Our economy cannot grow without increasing its money supply, and the only way that new money can be introduced, under the present monetary system, is through debt. But growth through debt really amounts to nothing more than spending next year’s income today. It’s a vicious cycle, one which has reduced millions to poverty, and to lives of indentured servitude. It’s time to end the debt, now. I believe that most good ideas are simple, and that any lasting reform must, like our very Constitution, be rooted and grounded in Judeo-Christian Principles.

There are two ways to approach monetary reform. One involves making changes to our current system, and the other involves a complete overthrow, starting over from scratch. I believe that one method is practical while the other is not. I am from the school of thought that believes it impossible to make the necessary reforms within the present corrupt system. Our monetary system has failed. Revolution is the only solution.

Under the current debt regime, there are two primary ways that our money supply is increased.

Let’s face the facts. Consumers are tapped out. Most Americans have lost the equity in their homes and are buried in consumer debt. It’s not that banks aren’t willing to lend, it’s that nobody is willing to pay 4.0% to 30.0% interest on money the banks borrow at 0.25%. The system is broken. So today, our economy is being propped up mainly through deficit-financed government spending, but this will not continue. We have already passed the point of no return. This mark was decisively breached in early 2010, when per capita national debt surpassed per capita personal income. At this point there is no longer enough income to support the federal debt. Every additional dollar the government borrows merely expands the base of government-dependent citizens. If the course is not altered today, the government will eventually run out of other people’s money, leaving its citizens vulnerable to enslavement by an alien entity. So the problem is the federal government’s inability to create new money without incurring debt. If we can fix this, the problem is solved.

What happens when population growth outpaces its money supply? As an example, let’s say we have a two person society comprised of you and me, with a total of $1,000 in our economy. Our per capita money supply is $500. Now let’s say two more people cross over the border and become members of our society. Without an increase in the money supply, our standard of living will decline to $250 per person. This is also known as a recession or even depression. Recessions occur coincident with declines in the supply of money, as there is no longer enough to go around. Economic activity declines without an ability to increase the money supply. In order to maintain our standard of living, our money supply will need to increase from $1,000 to $2,000.

As long as there is population growth, the supply of money must constantly increase. In fact, regardless of population changes, in order for there to be any meaningful economic growth at all, a society demands steady increases in its supply of money. That’s our dilemma today. With U.S. population increasing by approximately 1.0% per year, the money supply must keep pace. However, the only way that the money supply can increase, without reform, is through debt.

Who’s to blame? – We the people have knowingly or unknowingly subscribed to a monetary system in which the Federal Reserve is our master, and we are its slaves. In this respect, we are not truly free. Some blame the bankers; others blame politicians; while still others blame more affluent taxpayers such as small businessmen or corporate jet owners. (By the way, corporations and their assets, including jets, are owned by shareholders; so if you own stock either directly, or through a retirement plan, you might be a corporate jet owner yourself.) In reality, you and I are to blame. We are the ones who have elected ignorant and corrupt politicians, who have allowed our government to maintain a flawed monetary policy.

When our monetary system achieved total failure in 2008, we had an opportunity to institute real reform, but instead we were conned into bailing it out, again at our own expense. The present administration promised change, but instead has delivered more chains. Next time will be different. We know that if we want a different result, we have to try something different. Any political candidate who doesn’t have a monetary reform plan which promotes the creation of debt-free money (fiat money), and solid debt reduction, and balanced budget plans is dead in the water.

“The ax is already at the root of the trees, and every tree that does not produce good fruit will be cut down and thrown into the fire.” ~ Matthew 3:10

Who’s Getting Hosed? – Under our present monetary system, the federal government, through the Treasury Department, prints Federal Reserve Notes and hands them over to the Fed. The Fed then lends the same money back to the federal government in exchange for U.S. Treasury Bills, Notes and Bonds. The Fed then sells some of these Treasury obligations at a discount to its member banks, investors, and foreign governments. The interest paid on these bills, notes and bonds is paid from income tax revenue collected off of the backs of U.S. taxpayers.

If the federal government could ever pay off its debt and balance its budget, it wouldn’t need to borrow as much. With the national debt already in excess of $14.4 trillion, it has become a burden for our government to meet its real responsibilities. This is the main reason why the national debt matters. As politicians do battle over whether or not the debt ceiling should be raised, in this case, to cover its own irresponsible spending, a more critical issue, the creation of money has been left in the hands of the Fed. Under our current system, the money supply cannot increase without adding to the debt. But if there was a way that the federal government could simply issue its own debt-free currency (fiat money), rather than Federal Reserve Notes, it would never have to borrow money from anyone ever again.

The more the federal government borrows, the more it binds U.S. taxpayers to cover its interest payments. It makes you wonder why a U.S. citizen would ever invest in Treasury obligations at all. I mean, in a way, the same citizen who buys this debt is also responsible, through income taxes, for paying the very interest he or she receives. And to make matters worse, the same citizen is taxed again on the interest earned. It’s a spiral of negative returns in which those who actually pay income taxes and invest in government debt are the losers; while the Fed, its member banks, and foreign investors can’t fail.

The Fed also loans some of this borrowed money to its member banks and to other “too big to fail” entities at interest rates currently as low as 0.25%. The banks then provide you and I, and our businesses with loans, or allow us credit, for the privilege of paying them anywhere from 4.0% to 30.0% interest, plus other transaction fees, pocketing the difference as profit. Banks even allow us to open checking or savings accounts for the additional privileges of earning next to nothing, and paying them even more in transaction fees, for the use of our own money. So we pay interest on debt just so the government can issue currency, we pay interest on the national debt, and then we pay more interest for banking and loan privileges. These are hidden taxes of which certain politicians, those who are always harping about higher taxes, seem to be completely ignorant. But we know better.

End the Debt, Now – Why does the federal government print money, give it to the Federal Reserve, and then borrow its own money back at interest? Couldn’t the government simply print United States Notes, rather than Federal Reserve Notes, and spend it into the economy without a middle man? According to Bill Still, yes it can. In fact, Mr. Still says that if the government took this route, it could repay all of its existing debt within a year or two, by simply replacing the old notes with new ones. For more on this, I recommend that you watch his video entitled, The Secret of Oz.

“There is no retreat but in submission and slavery! Our chains are forged!” ~ Patrick Henry