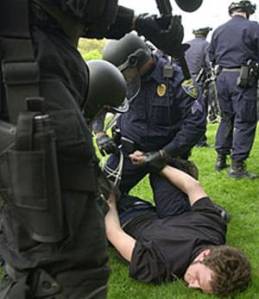 Many of us had ‘hoped’ for some simplification of the Internal Revenue Code, which has grown from 14 pages to over 17,000 pages since its inception. But it doesn’t look like that will happen anytime soon. H.R. 3200 will increase the burden of the income tax code by making the IRS the primary enforcer of Mandatory Health Insurance.

Did you hear that? You get your ‘mandatory’ health insurance, but you had better file your tax returns, and file them timely and correctly. Not only that, but you will have to determine what kind of health insurance you have and report it on your tax return, and if you don’t have it, or if it’s not acceptable, then a hefty penalty will be imposed.

So let’s see, will this make life easier, or more convoluted? My theory is that it will not only do the latter, but in the process will deprive all American’s of what if any liberty remains.

Linear thinkers, like Obama and others on the left, are incapable of seeing beyond the end of their noses, so it’s up to us to do our part to shed a little light.

You don’t suppose there’s any chance that the same 12 million people who either don’t pay, can’t pay, or won’t file income tax returns are the same ones lacking health insurance? Imagine that, the very same people who may owe the government over $100 billion now begging for free health insurance. No I’m not blaming them, but I’m just saying, it may very well be that the tax code is too complicated, that penalties are too stiff, or that income taxes are just way too high. But let’s leave that for another century, and let’s entertain our Messiah’s plan to make taxes more burdensome through Government-run Health Insurance.

Now let’s consider some logic. The IRS, a government agency that allows around 15% to slip through the cracks, will be in charge of a health insurance system that lets around 15% slip through the cracks. What will be the outcome? Do you think it’s possible to achieve 100% compliance with the tax code? Just ask the Obama Administration (Geithner) about ‘that one’. And do you think it’s possible to achieve 100% participation in health insurance, or in anything else human?

Short of placing government security cameras in our houses, a micro-chip in our heads, and completely brainwashing us, 100% participation in anything is not a human attribute. The 80/20 principle is generally good enough for us mere mortals. So on that count, the human factor, the plan fails.

Most likely, the outcome of Obama’s far-left, linear, robotic health insurance plan will be one of the following:

What do you think?

Unreal– Obamacare Violators Will Face Up to One Year in Jail

One thought on “The IRS as Health Insurance Police”