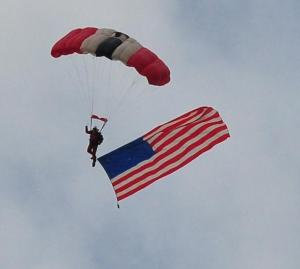 “If it sounds too good to be true, it usually is” was a catchphrase used by the Better Business Bureau to alert the public to shady business practices. The phrase was in use since at least 1954. In 1962, the BBB produced a short film titled, “Too Good to Be True”. – The Big Apple

The assets of the Old-Age, Survivors, and Disability Insurance Trust Funds represent the accumulation over time of the difference between income and outgo. The growth of the assets from the end of December 1986 through the end of September 2010 is shown below by calendar quarter.

So where’s the money, you ask? As I said before, there is none; it has already been spent. Yet these special-issue securities are miraculously able to both earn and pay interest at the same time; that is if you can call issuing new debt to the public “earnings”, and paying with IOU’s “interest income”. Interest on these non-marketable special-issue investments is paid (i.e. accrued) semi-annually, at the end of June and the end of December. “Because the trust funds hold no cash, investments are redeemed each month to pay for benefits and administrative expenses. When investments are redeemed, interest is paid. The amount of interest paid is used to offset the amount of investment redemptions.”

In other words, the Treasury pays interest to the Social Security Trust Fund, but not in the form of cash, rather in the form of additional special-issue securities. (Huh?) Interest is only physically paid out when money is needed for benefits and other costs.” And where does the money come from to pay the interest? You guessed it! It comes from income taxes, which you also pay. That’s right! The government requires you to pay 6.2% of your wages into a mandatory retirement plan, and then taxes you on the same income again to pay the interest which your investment is earning. Does this sound like a shady business practice yet?

For example, let’s say that John Q is 50 years old and has $250,000 in a 401K plan. Now let’s say that he devises a scheme whereby he is able to borrow and spend the entire $250,000, and pay it back with interest over time. Let’s also say that he is allowed to pay back simple interest of 2.8%, by merely issuing additional promissory notes. By the time John Q retires at age 65, he will have amassed a retirement fortune of $355,000 (on paper that is). As far as where his first retirement check will come from, why that would be from himself. As John Q’s retirement plan begins to make payments it will need to redeem a portion of the promissory notes issued by John Q. Since John Q is no longer working, and no longer has income with which to pay the debt, he’s out of luck. Perhaps John Q would have been better off by investing real money into a legitimate investment vehicle.

Why in God’s name would anyone make an investment which required them to cover the return on the same out of their own pocket? And worse yet, why would anyone do this when the initial investment and earnings are used to pay for other people’s retirement first? Won’t the “fund” be broke by the time you retire? Yeah, that’s the point. And to make matters worse, our return on investment appears to be crashing; which is good in the sense that we are the ones paying the interest, and bad in the sense that the return on our retirement savings is plummeting. (Huh?) 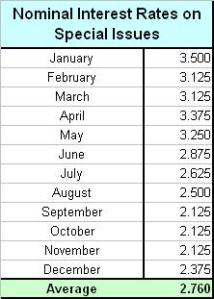 Diversification 101 – “Never put all your eggs in one basket.” It looks like the federal government has violated this rule in requiring that federal agencies invest only in federal government securities (special ones at that). The federal government can’t even balance a budget, let alone return a surplus; so why in the world would anyone invest their sacred retirement money in an entity which is currently $14 trillion in debt, and will not be able to earn a surplus, let alone breakeven for the foreseeable future? The truth is that if given a choice, most American’s wouldn’t. The problem is that we don’t think that we have a choice. Why don’t we have a choice? Who does this country belong to? Whose money is at stake? Perhaps it’s time to revisit privatization?