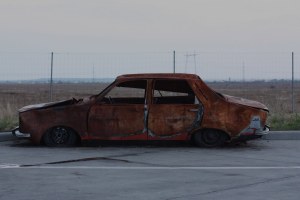 Car’s Out of the Ditch; What’s Left of It Anyway!

Realistically, it doesn’t look like anyone’s going to be driving this car ever again, so the highway that it’s on is irrelevant. And as far as what they’re sipping on, why that would be Kool-Aid. It looks like we’re going to need a new car, or perhaps just a new President, one who knows something about restoration. What in the heck is a government investment? I mean has anybody ever attempted to figure out what kind of return the government is getting on its current “investments”? I find it rather alarming when I compare the nominal rates of change in GDP, Unemployment, and the Public Debt during the recessions of 2001 and 2008. 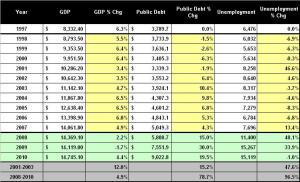 The following statistics are drawn from the table and chart above. We are comparing nominal figures of the number of unemployed, gross domestic product, and the public debt. The percentages shown represent the rate of change from one year to the next.

Moving into the year after the recession began, we notice a huge difference in the number of unemployed.

Now let’s look at the 3rd year after the beginning of each recession.

To summarize, the percentage changes over each three-year period were as follows:

There is no such thing as government investment. In spite of the government’s colossal spending campaign, which over the past three years has increased the public debt by 78.7%, in the end, the number of unemployed Americans expanded by an absurd 96.5%, and gross domestic product grew by just 4.9% (the same that was achieved in the single year of 2007). So it looks like the federal government’s return on investment over the past three years has been negative. All we got out of the deal was a ballooning of the public debt by 78.7%, and a gargantuan uptick of 96.5% in the number of unemployed Americans. So much for that theory. Government investment amounts to nothing more than meaningless rhetoric.

Perhaps it’s time for the government to get in the back seat; what’s left of it anyway. (1) Stop spending money that you don’t have, under the guise of making “investments”. (2) While you’re at it, you can stop playing God; enough with over-regulation. (3) And further, you guys can stop patting yourselves on the backs, because so far you have achieved nothing (nada). The car wasn’t in that bad a shape when Obama took the keys. The policies which Obama, Pelosi, and Reid implemented in 2009 are directly responsible for expanding both the number of unemployed, and the amount of public debt. Now that the car has been totalled, good luck with the C.Y.A. campaign.