Now that economists, media pundits, and the Obama administration have weighed in with half-hearted and inaccurate theories respecting April’s decline in the U.S. unemployment rate, it’s time to set the record straight. We learned yesterday, that the official rate declined from 8.2% in March to 8.1% in April, but what’s really beneath the decline? To know, one must have an understanding of how the unemployment rate is calculated, and how to access the appropriate reports. From there it’s just a matter of simple mathematics. After poring through the numbers, I have concluded that the official unemployment rate actually rose to 8.3% in April, while the real unemployment rate ticked up to 11.1%.

Nonfarm payroll employment and the official unemployment rate are inapposite (one has nothing to do with the other). In fact, if you take a gander at Table A-1, from which the unemployment rate is officially derived, you will notice that the number of employed persons actually declined by 169,000 from March to April of 2012. Does it make sense that establishments reported the creation of 115,000 jobs, while households reported losing 169,000 jobs? Which data set are we to trust? Well, since most of the hoopla surrounds the decline in the unemployment rate, we shall focus on Household Data.

As I outlined in Manipulation 101: The Real Unemployment Rate, the Labor Force is comprised of those who are either Employed or Unemployed, and the Unemployment Rate is calculated by dividing the number of unemployed persons by the size of the labor force, as follows:

Thus, the official unemployment rate of 8.2% in March, as reported by the Bureau of Labor Statistics on April 6, 2012, was calculated as follows: 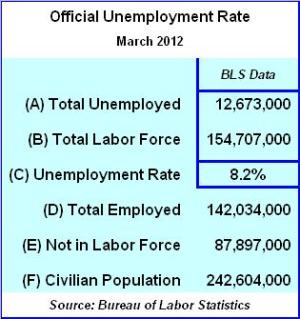 To take it a step further, if 12,673,000 persons were unemployed, out of a labor force of 154,707,000, then it should follow that the remaining 142,034,000 were employed. I found this to be consistent with BLS data and labeled the number of employed as item (D) in the table above. Next, in order to determine whether or not the decline in the unemployment rate is completely bogus, we must take into account some additional statistics from Table A-1, so I included the number of persons “Not in the Labor Force” (E), and the “Civilian Noninstitutional Population” (F). Now we will compare the March statistics to April’s calculation. 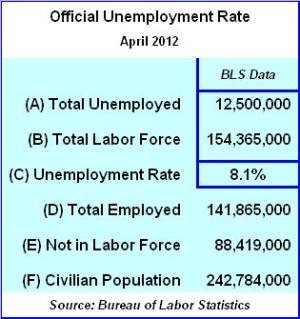 The April Employment Situation Summary concluded that a total of 12,500,000 persons were unemployed, out of a labor force totaling 154,365,000, equaling a decline in the official unemployment rate to 8.1%, from 8.2% in March. So what changed? 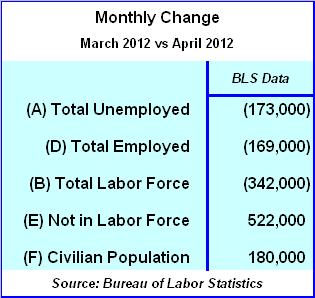 The number of unemployed persons declined by 173,000, not because they were able to find work, the BLS merely removed them from the labor force. The BLS also removed an additional 169,000 persons from the labor force, who were considered employed just a month prior. Thus, 169,000 persons were ushered directly from a status of employed in March, to completely out of the labor force by the end of April. Does this raise any eyebrows? Also noteworthy are changes in the number of persons “Not in the Labor Force” which increased by 522,000, and the “Civilian Noninstitutional Population” which increased by 180,000. How de we reconcile this?

The table below summarizes the truth behind the decline in the official unemployment rate. 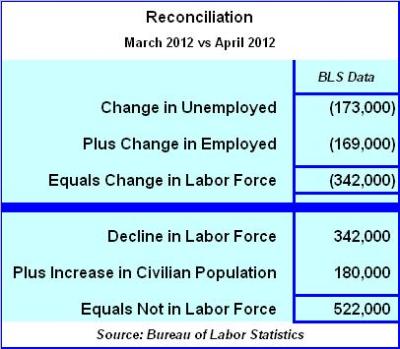 To sum it up, in April, 342,000 persons dropped out of the labor force, while another 180,000 new entrants fell by the wayside. In effect, a total of 522,000 persons were removed from the labor force. So what would the official unemployment rate have been had the 342,000 April dropouts been instead left in the labor force and counted as unemployed? The answer is 8.3%, as shown below. Thus, the true unemployment rate ticked up by 1 basis point, from 8.2% in March to 8.3% in April, rather than down by 1 basis point as the BLS reported. 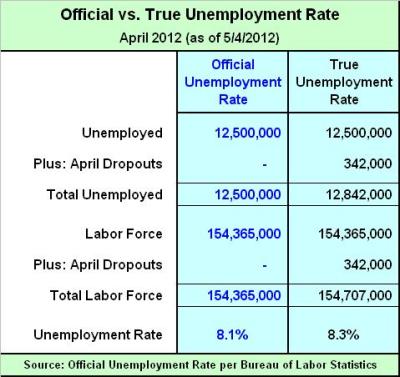 The labor force has historically grown at an annual rate of 1.0% (mirroring population growth), but looking back to December of 2008, it is safe to state that the labor force stopped growing altogether since Obama’s inauguration (see chart below). [Note: The labor force participation rate has likewise declined from 65.8% to 63.6% over the same period, or by 220 basis points.] 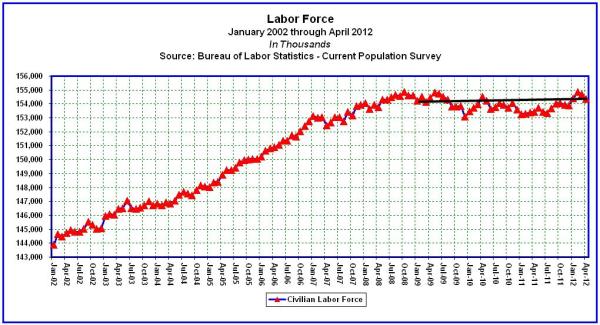 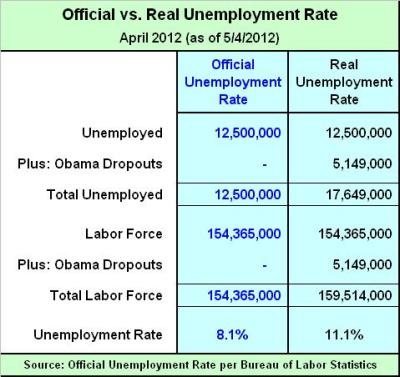 Are we really moving the right direction? That depends on ones definition of the word “right”. Is manipulating the truth right?

“Anyone who doesn’t take truth seriously in small matters cannot be trusted in large ones either.” ~ Albert Einstein