The current 2012 Tax Rate Schedule is shown below. Applying the Obama-Doctrine, single filers making over $200,000, and married filers making over $250,000 would get a tax hike. However, since there is no cut-off at either $200,000 or $250,000 in the current tax rate schedule, the 33% bracket would need to be split, resulting in a sharp tax increase for a handful of unfortunate individuals. 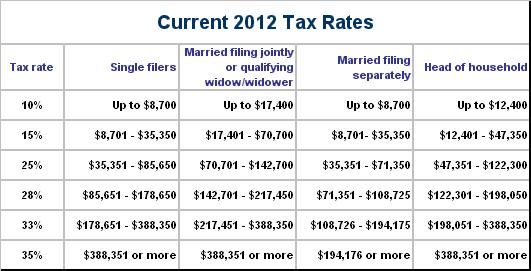 So what’s the effect?

We’ll use the married filing joint filing status in the following examples to determine the overall effect. 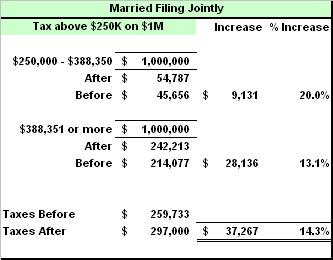 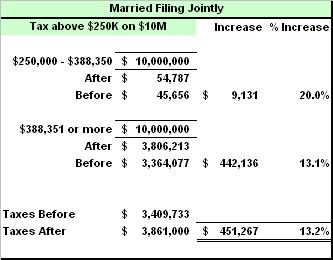 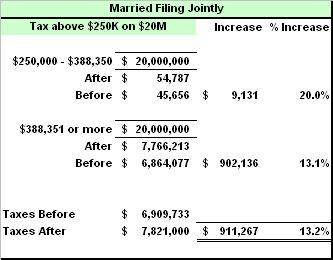 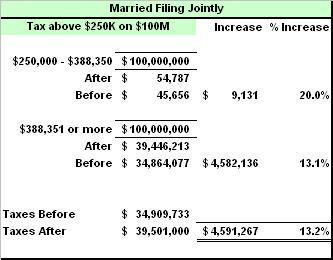 What’s wrong with this picture?

Secondly, those who already pay the highest tax rates will receive a 13.2% to 20.0% tax hike, which is being called –– fair. However, tax rates will go up the most not on millionaires and billionaires, but rather on single individuals with taxable incomes between $200,000 and $388,350 and married couples with taxable incomes between $250,000 and $388,350.

If a top marginal rate of 33% has been proven to raise more revenue than higher rates, due to the Laffer Curve (see video: Do High Taxes Raise More Money?), then why are we even talking about raising rates above the 35% mark? Aren’t rates already too high? Couldn’t we achieve the same parity by keeping top rates where they are and simply cutting tax rates on the 95% of Americans with incomes below the new ceiling? Why, yes we could. And here’s what the new tax rate schedule would look like if we were to do just that. 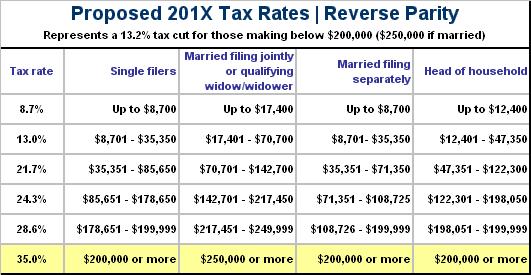 You say, “But what will your plan do for the deficit”? I say, what does the one on the table do for the deficit? Score them both dynamically (skip the static nonsense) and see which plan raises more revenue in the long-term. Not that it really matters though, since the main goal here is fairness, right? Well, that’s what my plan achieves.

So here’s how the Obama-Doctrine stacks up against the reverse parity plan. At current tax rates, married taxpayers filing jointly pay the following taxes (see table below). 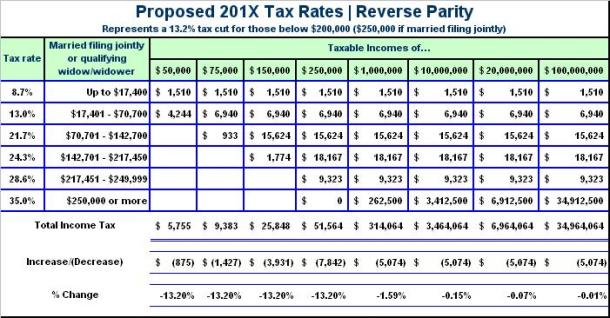 It’s the same thing the White House is striving for, except in reverse. The big difference is that under the reverse parity plan the middle-class gets a genuine tax cut, not just smoke and mirrors, while the upper-class pays an effectively higher tax rate, roughly 13.1% more than those with taxable incomes under $200,000 ($250,000 if married), and this is achieved without actually raising tax rates. The only exception, of course, is those poor saps stuck between taxable incomes of $200,000 ($250,000 if married) and $388,350, but that’s life, right?

It’s real simple. If ‘no change’ for 95% of Americans can be deemed a tax cut, then ‘no change’ for the remaining 5% can likewise be deemed a tax hike. It’s magic! Ninety five percent of taxpayers receive a stimulative tax cut, the top five percent get nothing, the Laffer Curve is respected, and fairness is restored. Problem solved. Now it’s time to tackle the real problem, those elusive spending cuts.