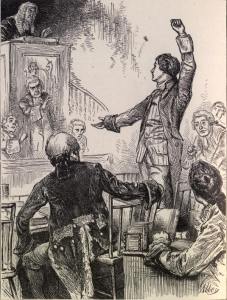 Small business owners, like myself, pay twice as much in Social Security and Medicare Taxes as regular employees. Yet when we ask for a payroll tax cut on our own pay, what we get from the government is a crackdown on regional banks to give us more loans. Aside from the fact that 140 of these banks have failed since January 16, 2009 (here), what Obama’s Cluelessian economists fail to understand is that wealth is not created through amassing debt.

If Obama wants to run the Federal Government based on the myth that wealth is created through debt, that’s one thing, but his attempt to sell this ideal to small business owners like myself makes him look inept. Small businesses are already in debt. Adding more debt does not translate directly into increased sales, but rather into higher monthly principal and interest payments (aka. ‘paying current expenses out of future income’). It’s one thing to borrow money to start a venture, or to secure lines of credit for working capital, but it’s entirely another to pile debt upon debt in a degenerating economy.

Wealth is created by increasing sales of products and services while maintaining or reducing expenses. Bankruptcy is achieved through maintaining or increasing expenses in the face of declining revenue. It is a fact, not a theory, that Obama’s reckless economic policies will lead to the latter. 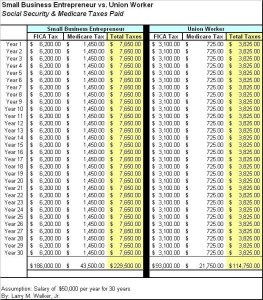 What we are asking for is fair. What we are asking for is economic justice. We want the Federal Government to stop unfairly burdening small businesses with an unjust burden of payroll taxes with no corresponding benefit. All we want back is some of our own hard earned money, produced from our own toil, in order to improve the future economic outlook of our communities and our nation.

If we get our desired tax cut, what will small business owners do? We will have been aided in paying our bills, in reducing our current debt, in not having to lay off additional workers, and in having survived for another day. And we will have done so with our own money, and not through a government handout.

Who will die? When I say, “give me a tax cut, or give me death”, it won’t be me or my fellow entrepreneurs who die. The first casualty will be the next laid off employee, and eventually the Federal Government. Every employee we lay off leads to negative government revenue, and reduced GDP. Most of us can scale back on spending and survive, but one can only cut so much before creditors are jeopardized. The Federal Government is well on the road that leads to death.

We will survive, but will the Federal Government? Small businesses have been cutting back on spending in the face of the economic decline. The Federal Government, on the other hand, has been increasing its debt. If Obama’s incompetent economic theory leads to the bankruptcy of the United States government, then that is just a natural consequence of spending more than annual revenue, year after year. Eventually the principal and interest payments will surpass revenue. But that’s Obama’s plan and not the road for me. As for me,

Give me a tax cut, or give me death!

8 thoughts on “Give Me a Tax Cut, or Give Me Death II”